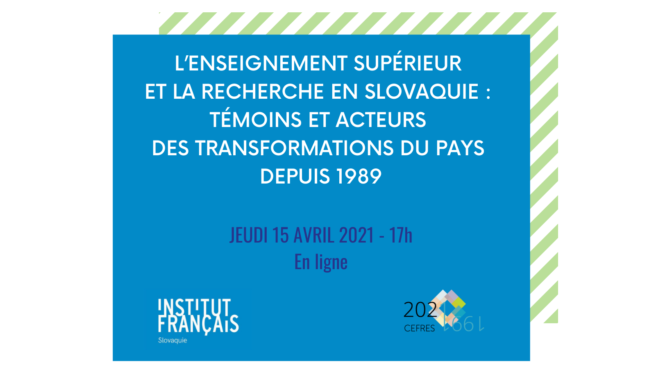 The French Institute of Slovakia and the French Centre for Research in Social Sciences (CEFRES) invite you to a round table during which we will focus on the world of higher education and research in Slovakia, particularly in the field of humanities and social sciences, as markers of the country’s history since 1989.

With the participation of Christophe Léonzi, French Ambassador to Slovakia.

The world of higher education and research has undergone many changes since 1989, as has the whole of Slovakia. The most salient of these are the end of the socialist bloc, the splitting of Czechoslovakia and the entry into the European Union. How has academic research and the world of ideas been impacted by the ordeal of communism and then by the hope born of the transition to democracy? What effect did Slovakia’s European integration have on Slovak higher education and research institutions, and on the content of research, while at the same time a process of liberalization and internationalization was taking place? More recently, the academic community has been impacted by other developments such as the growth and tertiarization of the economy, globalization and demands for more rule of law. Universities and research institutes have thus been both actors and witnesses of the changes in Slovakia during the last decades and the question of their autonomy and the freedom of researchers has been raised again in the spring of 2021.

In this round table, we will focus on the world of higher education and research, particularly in the humanities and social sciences, as markers of the country’s recent history. Partner of Slovak academics since its creation in 1991, the French Centre for Research in Social Sciences (CEFRES) celebrates its 30th anniversary in 2021. This is an ideal opportunity to analyze thirty years of Slovak research and international cooperation and to consider their future.