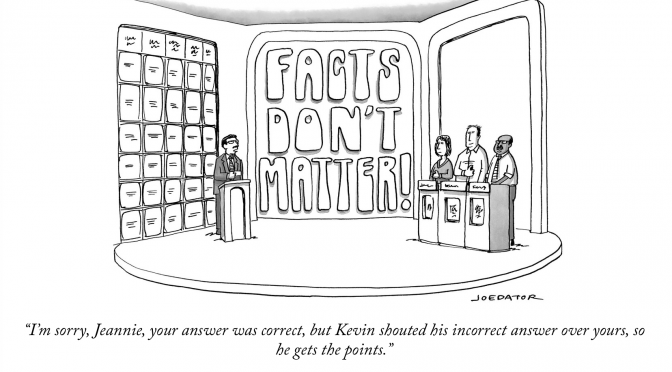 A session of the École normale supérieure European seminar Critical News (see below), in partnership with CEFRES and Charles University, with the support of Paris French Institute.

A debate on humanities in the post-fact era

In duplex with the ENS seminar: the presentations will be followed by debates between Paris and Prague

At a time when a large part of the population has replaced traditional media such as TV, radio and newspapers with internet forums and social networks as their first channel of information, public debates are increasingly plagued with conflicting exchanges, all the more as many political representatives now use immoderate and “excluding” speeches which do not aim at consensus but at humiliating so-called adversaries or foes. Increasing verbal and physical violences, abstention and citizens’ widespread suspicion toward political representation bear witness to the subsequent deterioration of public debates.

Such trend poses a significant challenge to the academic world as it reflects upon both new discursive analytical tools and new forms of intervention within the public space to tackle information falsehoods. The debate will focus as much on the available means to better scrutinize and understand the specific dangers of the so-called alternative truth and of simplistic arguments as on the responsibility weighing on researchers in social and human sciences as they are confronted to the dissemination of such nexus of fake news. What is the part sociologists, political scientists, historians and philosophers should play in the so-called post-fact era?

To launch the discussion, see on this topic:

Who can deny that news have become critical and should be criticized? However, critical news  raise dangerous, if not lethal issues: crisis manipulation, perverted criticism, permanent state of emergency, constant suspicion, concurrent enforcement of “breaking news” and “fake news”. This is why we need to defend a new Critique and adress the fact of critical news today:

Critique can suffer from a national bias, but no issue can ever be analyzed as an universal, abstract situation. This is why it is not only possible, but necessary to promote an European and interdisciplinary approach to critical news.
The European Critical News Project (Actualité critique européenne) originates from the seminar “Actualité critique” seminar of the Ecole Normale Supérieure in Paris: it gathers students and researchers and focuses on various critical topics, from politics to science to economy, society and art. The European project aims this seminar to an European level, with a special emphasis on European issues.

The European Critical News Project is supported by the Institut Francais network. It will be launched in 2018 and will be hosted in Prague, Warsaw and Rome successively, in duplex with the ENS seminar in Paris. During this first semester the “University” will not only provide a critical frame, but also act as a critical question, in more than one way: academic freedom, academic fees, student status in Europe, European university…

The Ecole normale supérieure and the Institut Francais welcome European Universities to join this network and address together, and today, the vital challenge of critical news.