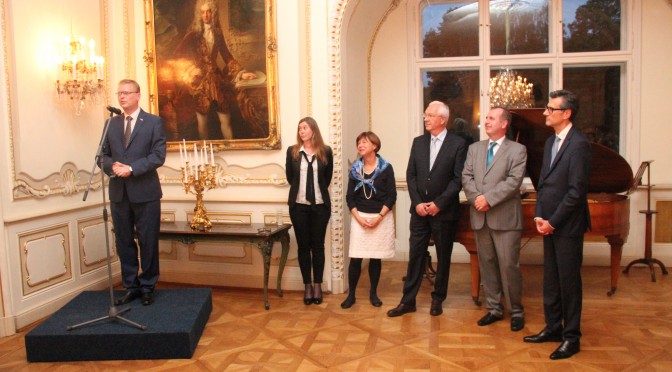 CEFRES’s team will move in its new premises—the new library, and two offices on the 4th floor—in December 2015. The AV ČR also granted CEFRES with additional offices for its researchers in a second building on Národní 18, within the Institute of State and Law—ten minutes away from its new main house! The Platform’s inauguration was held on its three partners’ sites: at 6 PM, the French Embassy greeted many partners of CEFRES, including colleagues from the Masaryk University in Brno, the Institute of International Relations in Prague, and from the universities of Pardubice, Hradec Kralové and Ostrava, as a reminder of the non-exclusive feature of the Platform in its action of scientific cooperation. The presence and speech of Vice-Prime Minister of the Czech Republic Pavel Bělobrádek, were a strong token of the commitment of the Czech government to supporting social sciences and humanities and their development within the Czech-French relationship.

See the reports on: On 8 octobre at 4 PM, French sociologist Bernard Lahire from École normale supérieure in Lyon, gave an inaugural lecture in the beautiful Patriotic Room of Charles Univer sity.
He stressed the inputs of the interdisciplinary methodology in the research on the social sphere, from art history to biology and neurosciences. You can  to watch his lecture on our new Youtube channel!