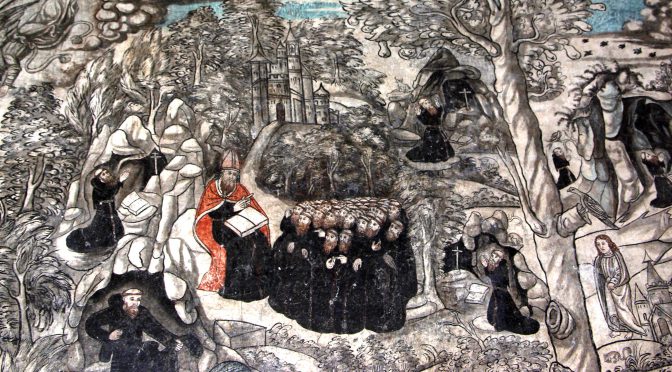 An International Workshop proposed by the Center for Ibero-American Studies of the Faculty of Arts, Charles University (SIAS FF UK), the French Institute for Research in Social Sciences (CEFRES) and the Institute of Art History of Czech Academy of Sciences (ÚDU AV ČR). The collaboration is realized within the Research project “Cataloging and study of the translations of Spanish and Ibero-American Dominicans”.

The aim of the workshop is to set into focus the monastic space as a multifaceted research theme from a global and interdisciplinary perspective. We invite papers that address the questions how monastic institutions contributed to the flow and exchanges of cultural practices and how their role as cultural mediators shaped their material culture and spatial politics. The scope of the workshop has no timely, geographical or confessional limitations as it intends to generate dialogue between researchers from various disciplinary backgrounds.

For centuries, monasteries served as centers of education and culture. Literary works, sermons, translations and artefacts were created among their walls that never served merely as an impenetrable isolation from the outer world, but rather represented a conscious politics of structuring both the physical and the mental space. They kept contact not only with their closer environment, but also formed part of greater intellectual, spiritual and economic networks and interacted with different stakeholders of worldly power. They could serve as strongholds of cultural and religious missions that penetrated into new territories, triggered intercultural and interconfessional interactions and facilitated knowledge transfers, while their long-lasting presence in a territory could also ensure continuity and enables the investigation of long durée changes, reforms and renewals. Their evolvements and transformations unavoidably shaped both their inner spaces (including material culture and architecture), and the landscape around them and thus, they also contributed to the formation of such notions as identity, borders and migration.

Against this background, we invite papers on the following thematic fields:

The workshop is designed primarily for young researchers— especially Ph.D. and postdoctoral students—aiming to explore the future perspectives of the aforementioned themes in an innovative way and to lay down the foundations of further cooperation beyond disciplinary and national boundaries. Simultaneously, it also aims to create a forum that features well-known scholars among its speakers and disseminates information about ongoing research projects, academic working groups and relevant publications. The Journal Ibero-Americana Pragensia also offers the opportunity to publish the presented papers. The language of the workshop is English, but abstracts submitted in other languages (German, Spanish, French) can be also accepted.

If you are interested in participating, please send your name, academic affiliation and an abstract of 250 words by 26 June to the following email address: workshopSIASCEFRES@gmail.com. Applicants will be informed about the selection of their papers by 31 July.