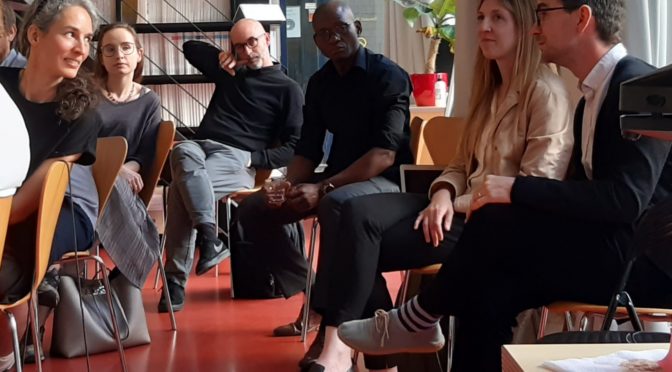 One of CEFRES’s mission is to train the young researchers welcome at the center.

Since Autumn 2021, CEFRES has launched a new research seminar gathering all its PhD fellows and researchers and open to its young researchers and to MA and PhD students of its partners in the four Visgrad countries.

Through the presentation of works in progress, CEFRES’s Seminar aims at raising and discussing issues about methods, approaches or concepts, in a multidisciplinary spirit, allowing everyone to confront her or his own perspectives with the research presented. The seminar can be led by a single researcher or in pairs, be based on a reading or a document, or welcome an external researcher invited to present particularly inspirative work.

16 February
Julien Wacquez (Labex Les passés dans le présent, University of Paris Nanterre, associated at CEFRES)
“The Galactic Plane of Human History or the Hold of the Infinitely Large Scale in Our Lives”

2 March
Dušan J. Ljuboja (ELTE University, Budapest, associated at CEFRES)
“Pan-Slavism or Romantic Nationalism? The case of the Pest-Buda Serbs in the first half of the nineteenth century”

6 April
Anemona Constantin (CEFRES)
How to study an “ugly” movement? Romanian conservative intellectuals and the backsliding of democracy in Central Eastern Europe in transnational perspective

11 May
Nikola Ludlová (CEFRES)
Planning from the future. Population Forecasting as a Scientific Instrument of Population Control

13 October
Arthur Pérodeau
“Nation(s) in the Middle Ages? Discussing a Controversial Concept through a Sample of the Oldest Czech Historical Sources”

3 November
Mátyás Erdélyi
“What did the Typewriter Do to Banking?
Bureaucratic Practices, Materiality, and the Logic of Capitalism in the Late Habsburg Monarchy”

10 November
Jan Kremer
“Digital Games as Representations of the Past: The Central European Context”