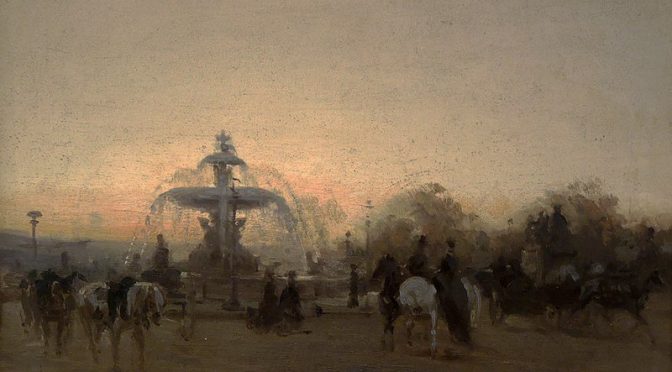 Please send both organizers your paper proposal up to 3,600 characters, in French or English, by 18 March 2018, within the fulfilled application form. The selection committee will contact selected candidates by 20 April 2018. Papers should be no longer than 25 minutes and will be followed by a discussion. A publication is planned.

The workshop focuses on the question of artistic exchange between France and Central Europe (viewed broadly as the region from Germany to Russia) during the 19th century (1789–1914). Back then, Paris was regarded as one of Europe’s most important cultural hubs, and that was also the reason why so many Central European artists wished to visit it. In Central Europe, France had a reputation of a prosperous and culturally progressive country and Paris was the scene of splendid architectural wonders (such as the newly raised Opera Building). At the same time–and more to the point–France was also becoming the birthplace of new and innovative artistic styles.

The goal of the workshop is to look at French art history from the viewpoint of the cultural transfer theory. It will touch upon various aspects of the spreading of French culture and art (painting, sculpture, architecture, applied arts) but also the fields of museology and cultural heritage protection.

First, as we examine the French cultural milieu, we need to identify the phenomena that caught the interest of foreign artistic communities and triggered cultural exchanges, which consequently led to the circulation of models, knowledge, ideas, patterns, forms, or to the appropriation of institutional structures.
Furthermore, we need to study the network of social connections that enabled this kind of artistic exchange in the first place–locations, individuals, or institutions playing the role of intermediaries. In this context, we shall emphasize the roles played by studios, museums, art colonies, papers and journals, social clubs, salons, and intellectual circles in general. Mediators often included art dealers, patrons, gallery owners, as well as art critics and scholars.
Lastly, the receptions, appropriations, and reinterpretations within the receiving culture must be looked into. In each particular case, we need to take into consideration the economical and political situation of the country in question, the degree of openness towards cosmopolitan practices, the emphasis put on the national identity, and finally, the nature of the local institutional frameworks.
In many aspects, 19th century witnessed the emergence of new institutions–such as museums, art galleries, cultural and professional clubs, and art journals–as well as the growth of the art market and the gradual institutionalization of historical monument protection. At the same time, the 19th century was a time of significant transformations; a time when European cities went through radical metamorphosis, which, among other things, turned large urban areas into construction sites. The architecture was to respond to the new needs of the population. Furthermore, the traditional patrons of art and architecture–the European aristocracy–were now in this aspect joined by the newly emerged bourgeoisie. Lastly, it should be pointed out that in the context of cultural exchange, there’s always a duality between inclination towards local traditions and desire for innovative impulses coming from outside.

The contributions may explore one of the following topics:

Art education: The problem of art education is twofold. On the one hand, a certain degree of familiarity with the history of French art and art education, especially with regard to European Academies, could be acquired, but at the same time, we would rather focus on the appeal of French education, especially when it comes to the Academie des beaux-arts or private Paris studios. This is why we are interested in a sociological analysis of the students of these establishments, as well as their day-to-day operations. What might be considered helpful are the various educational aids, such as publications, templates, or models.

Artistic migration: Artistic migration plays an important role in the process of cultural exchange. Apart from education (which we have already mentioned), it was fueled by other phenomena, like foreign commissions, major exhibition projects (such as the World’s Fairs), influence of the major artists, scholars and other specialists, or the contemporary artistic tendencies. There are different types of artistic migration, from short-term trips through longer sojourns up to permanent residency in the foreign country. The contributions should assess the evidence of said migrations, such as travel journals, letters, sketch books or exhibition catalogues.

Style and artistic expression: Which innovative methods sparked the interest in French cultural scene? How exactly did the subsequent cultural exchange influence the art in the Central European countries? How were these echoes of the French art viewed in France itself? What was their meaning? How did this phenomenon change as new generations took over?

Research in this area aims at further developing understandings of displacements that impact people, knowledge and practices by exploring the ways they are transformed as they pass through space and time. The term ‘displacement’ covers the whole scope of mobilities, flows and circulations related to people, material and cultural goods and ideas. Displacement entails renegotiating and reshaping the content it affects. Indeed, it involves crossing borders, whether symbolic or concrete, where interactions, exchanges, contacts and frictions can occur. END_OF_DOCUMENT_TOKEN_TO_BE_REPLACED