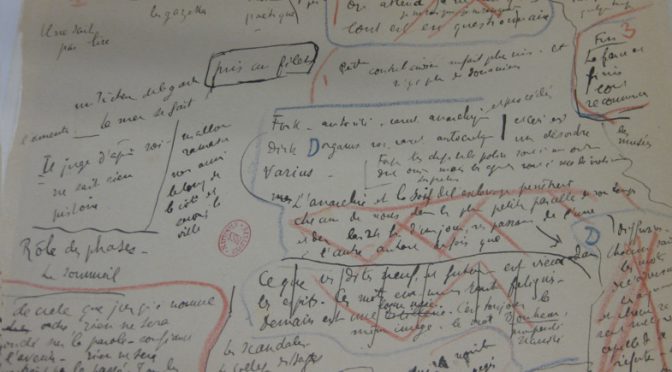 Whereas philosophy is usually conceived of as sheer “abstraction,” the study of manuscripts engenders a dynamic, diachronic and genetic, approach of the writing of its texts, understood as the material traces of as many exchange and sharing practices. Philosophy is written so to put one’s thoughts into words. Which means choosing forms, genres, and literary strategies, which turn out to articulate the epistemic limits, ambitions and self-images ascribed to itself by conceptual research in its contemporary history.

Observing the genetic steps of a text, its hesitations and alterations, allows to see the writer-thinker’s struggle with the angel of language. Whereas the thinker endeavors to translate his/her experience’s into a “pure” expression flirting with the limits of the linguistic medium, the writer within seeks to ground the theoretical exploration on a variety of codes and languages, often through the use of a terminology borrowed from several traditions to fortify his/her own attempt at creating a new language.

Therefore, such work in progress shows that any theory is a linguistic and intercultural practice of its own right. For the study of the writing phenomenon sheds light on the cultural set-up of theories which aim at being abstract and neutral, absolute and universal, and opens a path in the wake of the thinker as he/she makes way through the various shared traditions of thought, languages and rhetorical codes. The team working on “Archives and Interculturality” includes Benedetta Zaccarello, PI, and post-doctoral researcher Thomas Mercier. Their research aims to highlight such stakes of the philosophical discourse.  We will investigate the multicultural and inter-linguistic dimensions of the thought of some contemporary philosophical authors as well as focus on the intrinsically political value of the conservation and study of philosophers’ work documents. Indeed, since they reveal the dialogue between different cultures and traditions at play behind the thought they convey, archives remain an incomparable action against any ideological manipulation. This is why such project perfectly fits to its Prague cultural context and to the history of the Jan Patočka Archives, one of our team’s privileged partner.

Along with our personal research on Aurobindo Ghose and Jacques Derrida’s manuscripts, we are planning an international conference (7-9 June 2018) on the wording of thoughts, which will gather a vast network of specialists from Europe and India. In this end, we are currently setting up a scientific exchange with the French Institute of Pondicherry that should lead to the comparison of the value of the archive notion within the Indian and European traditions, and to assess the postcolonial stakes of the practices and theories related to archiving.