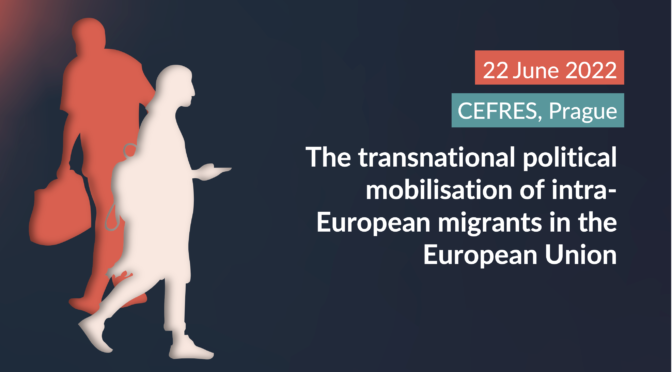 In the interstices of European citizenship. The transnational political mobilization of intra-European migrants in the European Union. II.

The multidisciplinary research workshop is organised in partnership between the Marc Bloch Centre in Berlin and CEFRES in Prague. It aims to bring together specialists in migration, European citizenship and transnational political practices to discuss the question of the ordinary relations of intra-European migrants to the policies of diaspora implemented, according to very different modalities, by their country of origin.

You can download the updated program here.
See the description & program below.

Further description of the workshop:

Brexit has recently given increased visibility to the issues of the political rights and practices of European citizens living in another European country. Throughout the bumpy process towards the exit of the United Kingdom from the European Union, the strong mobilisation of Europeans living in the UK and of Britons living in continental Europe came as a reminder of the importance of intra-European migrations in the one hand, and of the significant variations in the ways in which Member States approach their nationals living abroad on the other. In spite of the affirmation of European citizenship over the last 30 years, the 13.5 million EU citizens who reside in another Member State than their own are indeed far from all receiving the same attention and treatment from their country of origin. Some retain full civic rights, while others may be deprived of them. Some have special political representation in their country of origin, while most do not. Finally, some are the target of specific policies and benefits which are intended for them by their country of origin (particularly in economic, social or educational matters), while others depend exclusively on the provisions of their country of residence.

While research on ‘diaspora policies’ has grown significantly in recent years, particularly in the framework of transnational migration studies, research dealing specifically with the case of European Union and its Member States has remained rare. However, the implementation of national diaspora policies raises specific issues within the European Union. What have been the effects of the construction of a European area of free movement and of a common European citizenship on the rights and duties of intra-European migrants? How can we explain the persistent diversity in the way in which the different Member States engage with their emigrants within the European Union? Furthermore, while existing research has led to a better understanding of states’ motivations for implementing diaspora policies, little is known about the concrete ways in which citizens living abroad make us of these policies. Do European citizens residing in another Member State really aspire to maintain political links with their country of origin? Under what conditions and in what context do they actually use and benefit from the diaspora policies implemented by their country of origin?

The present research workshop gathers specialists in migration, European citizenship and transnational political practices. It invites them to revisit and discuss their research in the light of these questions. In a comparative and interdisciplinary perspective, the objective is to open up new research perspectives on the interactions between intra-European migrants and their countries of origin as well as on the differentiated manners in which diaspora policies are implemented and used within the European Union.

The first session (in Berlin) will focus on the conditions under which intra-European migrants make use of the policies, programs and benefits which are intended for them by their country of origin (particularly in consular, cultural and socio-economic matters), in relation with their uses of the rights related to European citizenship. In this perspective, the empirically-based contributions to the session will pay particular attention to the pivotal periods for the (re)definition of the relations between national and supra-national citizenships, which were, on the one hand, Eastern enlargements of the European Union and, on the other, Brexit.

The second session (in Prague) will focus more specifically on the relationship of intra-European migrants to the political life of their country of origin. Based on historically and geographically diverse case studies, the contributions of the session will discuss the conditions of transnational political engagement of citizens established in another European country, especially during elections in their country of origin.

14h30: Welcome address by Jérôme Heurtaux, director of the CEFRES