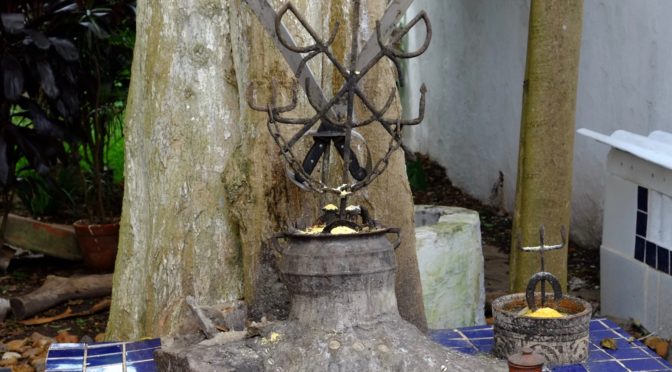 Giovanna Capponi (CEFRES/FSV UK) will give a lecture within the Gellner seminar organized by the Czech Association for Social Anthropology (CASA– Česká Asociace pro Sociální Antropologii), the Czech Society of Sociology, in cooperation with the Institute of Ethnology of the Czech Academy of Sciences and CEFRES.

A religion of nature? Anthropology of sacred artefacts and cyborg gods in Afro-Brazilian religions

Afro-Brazilian Candomblé, the worship of the West African deities which spread around Brazil as a consequence of the Atlantic Slave Trade, is often described by its followers and by the anthropologists who studied it as a “religion of nature”. Indeed, Candomblé deities (called orixás) are closely associated with natural elements in the landscape; but they are also associated with human temperaments and with different stages of life and matter. In the attempt to problematize and understand what kind of “nature” is implied in this context, I will analyse the sacred artefacts that constitute a central part of the ritual practice, the so called assentamentos.

The rules of fabrication of these mysterious factishes, using Latour’s neologism, are often surrounded by secrecy and sacredness as they constitute the physical “bodies” and “mouths” of the orixás where sacrifices and offerings are performed. Involving animal blood, vegetable substances, and other materials like wood, iron or copper in the making, the assentamentos are made by humans as a means of condensing and manipulating axé, the sacred force that is infused in natural elements. Trying to escape the colonial narrative that long described these practices as “fetishism”, I would argue that these artefacts can be understood as powerful “technological” devices and channels of communication between the visible and the invisible world. Moreover, these receptacles mirror both the deity and the heads of the novices who undergo the initiation ritual, which starts a lifelong bond between the orixá, the artefact, and the human.

Using Haraway’s metaphor of the cyborg, I analyse how these artefacts transcend and challenge the dichotomies of Western thought. Being it at the same time alive and inert, natural and technological, human and animal, infused with life force and mere vessel, the assentamento subverts these categories and sheds a light on the ways in which humans, gods, animals and elements of the landscape are made and perceived.