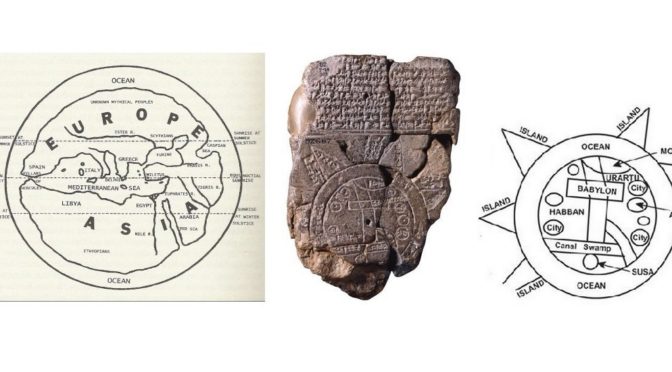 The first world’s maps : The mythical and geographical origins of the birth of Europe and the concept of continents

We are living in a world divided in continents. This fact seems evident for us, but a more careful look on the world’s map can let us doubt of this evidence and leads certain people to talk about the “myth of continents”.

The aim of my contribution is to present the broaden context in which the concept of continents emerges: in particular, the creation of the first world’s maps, the Babylonian Imago mundi (British Museum 92687) and the first world’s maps coming from Greece, assigned to Anaximandre of Milet and then to Hécatée of Milet, whose geographical ideas can be reconstructed from the preserved fragments of his work Periegesis, and also on the basis of other evidence, including the work of Herodotus.

What is decisive here are the following factors: dichotomous reasoning; binary oppositions; geometric constructivism (in Gehrke’s words, “the earth is put to the Procrustean bed of geometry”) as well as mythical stories and political experience.

“I laugh, when I see that many have already drawn images of the earth as a whole, without any of them having given a reasonable commentary; they represent the Ocean enveloping with its course the Earth, which would be all round as if it were made on the turn, and they imagine Asia equal to Europe. (…) Nor can I explain to myself on what occasion the earth, being one, has received three distinct denominations, drawn from women’s names (scil. Europe, Asia, Libya), and were fixed between its parts as lines of demarcation the Nile, river of Egypt, and the Phase of Colchis (others say the Tanaïs, river of the country of the Maiotes, and the Cimmerian straits); neither, to know the names of those who traced these demarcations, nor from where they drew the names of the parts.”

See the complete program of the seminar here.